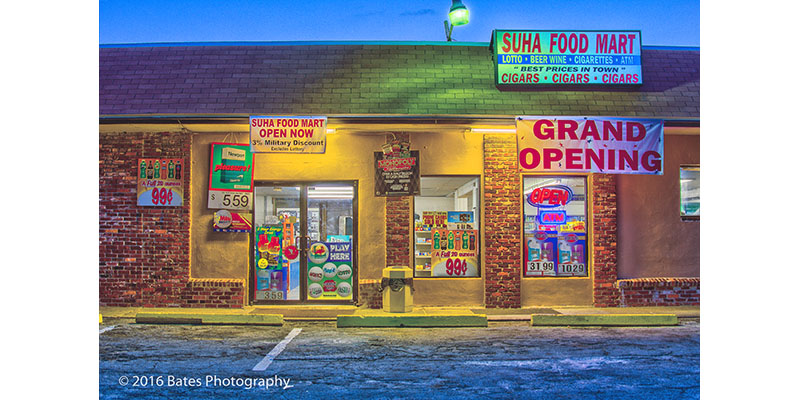 When my wife Cheryl and I first spotted Tampa’s Suha Food Mart, we pulled into the parking lot to check out its intriguing signs. Almost immediately, A. H. Ahammed and his partner Hiron came out of the store and asked us if there was anything we needed. This was unprecedented. I’ve never had a bodega owner ask if he could help me outside the store. He wasn’t being suspicious, because shortly afterwards he asked us if we were from “the neighborhood.” When we answered that we lived twenty miles away, he seemed almost disappointed. We went in and bought a few sundries and told them of the Bodega Project. They liked the idea. When I went back to the parking lot to get my camera, I looked at the Grand Opening sign, I realized they’d just been eager to drum up customers. Both men are from Bangladesh and have been in the country only a few years. Mr. Ahammed did not do this sort of work when he lived in Bangladesh, but he learned the business after he arrived in the United States and worked for other market owners.

What about the store’s name? Ahammed named it after his daughter. Even though she is only three years old, and even though he has been open a short while, he definitely doesn’t want her working in the business when she gets older. Like many (but not all) bodega owners, he doesn’t want his children working twelve hour days, seven days a week. He’d rather she “get a professional job.”

Already, the store has acquired a stamp of its own. While it carries typical items like candy, cigarettes, scratch tickets, paper cups, and plantain chips, it also carries clothing. One panel contains a stock of unlabeled white t-shirts. A revolving rack has about twenty bill caps, looking oddly bereft without sports team insignias. He’s putting in a deep fryer, but he is not quite sure what he will cook in it. “Maybe chicken,” he says, but definitely not Bengali food. The store is less than a mile from MacDill Air Force Base. In a stroke of marketing genius, he offers a “3% discount” on all items (except tickets) to customers in the military. While it may be a modest gesture, it’s certainly rare in this business. The 7-Eleven a few blocks up offers no such concession.