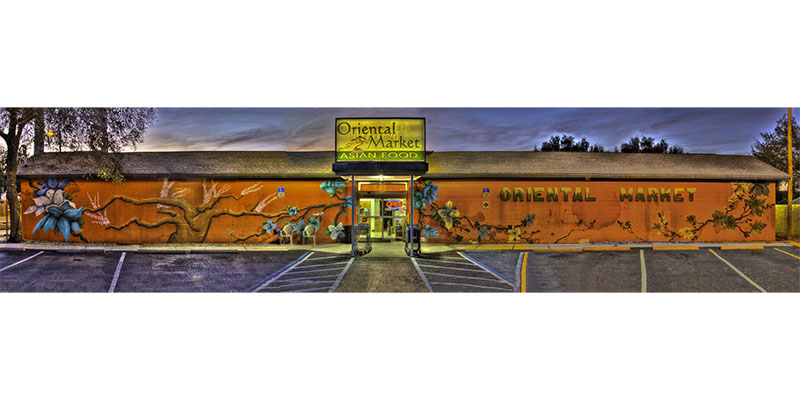 Most Florida bodegas are much longer than those in New York or New England, so to photograph them, I was presented with really only two solutions:

1. Shoot them with a wide angle lens. Depending on the strength of your wide angle lens, you can probably fit your building into the entire scene. I used a wide-angle lens on the Deli Plus Bodega Carniceria. However,  notice how much foreground is in this picture. The height of the building has been so foreshortened by the wide angle that there was a vast expanse of parking lot in the foreground. I was faced with the daunting task of making that visually interesting. (I plan to describe how I did that in a future tutorial.)

2. Shoot them as a panorama. After going through the above experience, I decided that shooting-as-panorama is not just a good idea but paramount. Yet in taking multiple shots, how do you stay on the same horizontal plane as you move your tripod across the building face? If your all-too-human sense of straight line zigzags, it can throw you off considerably. Even Photoshop’s Photomerge tool or Lightroom’s Lens Correction feature cannot easily save your creative behind. The scene will probably require much cleanup.

Here are the steps I took to deal with bodegas like the Brandon Oriental Market pictured above: