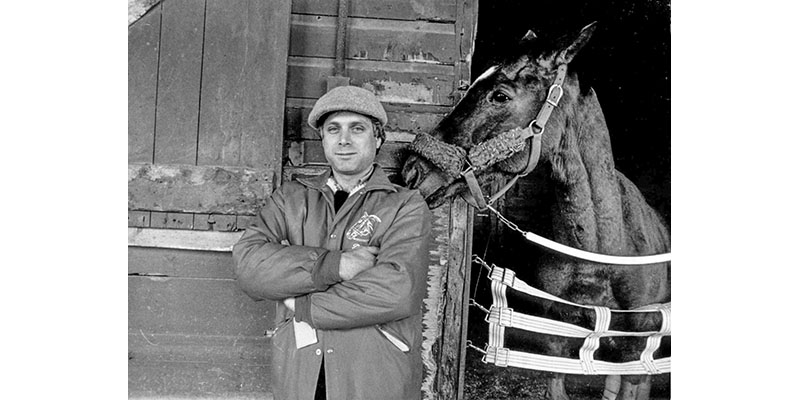 This photograph of  Rassel Zahid of Happy Superette is a special kind of environmental portrait.  How did I do it?

Over the years I’ve taken my share of environmental portraits. You know the type: a picture of the subject that hints at their interest or profession and shows them doing what they love or what pays the bills. A computer programmer at her computer, sitting in front of a page of code. An animal acupuncturist standing with the horse he’s just treated.

In photographing bodega owners, I’ve tried several approaches to the right environmental portrait. I’ve had them stand in front of their cash registers. I snapped candids of them accepting money from customers.  Sometimes I was slopping and walked away with pictures of them just staring at me from behind a counter. Obviously, some are successful and some aren’t (even though, technically, all are environmental portraits). So how do you make one of these portraits stand out? Look at this photograph of Rassel Zahid, owner of Happy Superette in Dorchester, MA? What makes his environmental portrait work?

Talk to the Subject and Find out What Rings their Bell

I talked to Mr. Zahid and realized that he was not only proud of his store, but that he saw his role in the world as important and enjoyable. I wanted to convey that emotion. In having him stand in the aisle between two shelves of his store’s goods, leaning on them with his arms, I conveyed his tactile relationship with his store. His physical attachment to his store made him smile, as if he knew at that moment that it was the best thing he could be doing with his life. It wasn’t the only shot I took of him that day, but it’s the one that clicked.

Show Connections between a Person and Their Passion

Show that they are connected with their occupation or hobby. A picture of a golfer just swinging her club is commonplace and conveys little. But a portrait of a golfer in a small room, engulfed by bags stuffed with golf clubs and a bucket of balls in the foreground, conveys passion, even obsession. An animal acupuncturist near an animal isn’t enough. After taking ten shots, we were able to get the horse in the above picture to relate to Mr. Robert Banever. He nudged him, as if in gratitude. Ms. Brown-Awkward isn’t just staring blankly at her computer screen. She’s looking  back at me, as saying, “Hey, look what I just created!”

Use Post-Processing to Make the Person Stand Out

It’s all right to use Photoshop in processing. Have it make the background slightly blurry. Viewers will still know what it is, but their eyes will be drawn to the person in the foreground. Or fool around with color. Mr. Zahid may be in full color, but his store aisles were desaturated somewhat so that they didn’t overwhelm him.

Your subjects will pick up on any nervousness on your part, and guess what? It’s contagious. Don’t talk too fast. Don’t interrupt. And make a joke or too. They don’t have to be that funny; your subjects will relax even if what you say is a bit silly.