Cuban-American Makes a Go for it at Borincuba 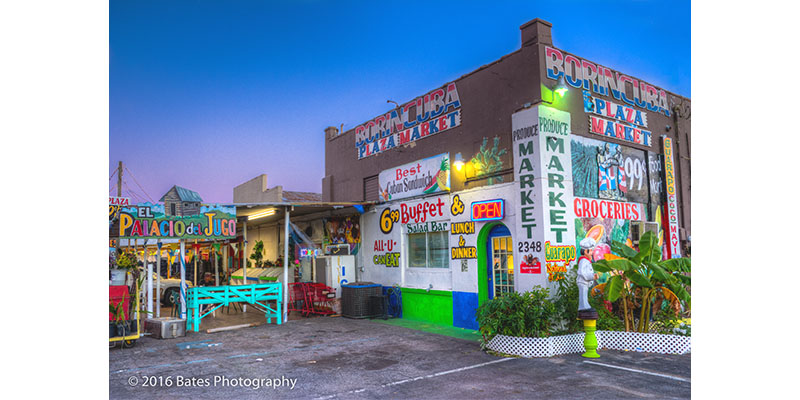 Your first impression of Borincuba Plaza/Market may involve a classic double take. The architecture is so colorful, with its suffusion of brightly-colored signs, lack of corporate logos, and Carribean-style awnings that you’ll be tempted to turn around and investigate further. Of course that’s the whole point. Its design shouts at you from the street.

And if you’re lucky, you may pass by while owner Julian L. Perez is cutting a coconut open with a machete. Or roasting a pig. “What country am I in?” you may ask.

Perez is Cuban American, born in Guantanamo, Cuba and emigrated at fourteen. His opinions about the Cuban government’s current negotiations with the United States are similar to those of his fellow ultra-conservative expatriates. “The gullible American people are going to be hurt by this. As long as Cuba is a communist country, there is no business to be had there.”

But there is plenty business to be had at Borincuba in Tampa. Perez says he’s a “workaholic.” He hands me a card for his next-door business Borincuba Wheels & Tires LLC and claims he’s built 33 other local businesses. “They all still thriving and paying taxes.” He clutches an American flag. “I love this country. Work, work, work and you can make it.”