The Face on the Bodega Wall 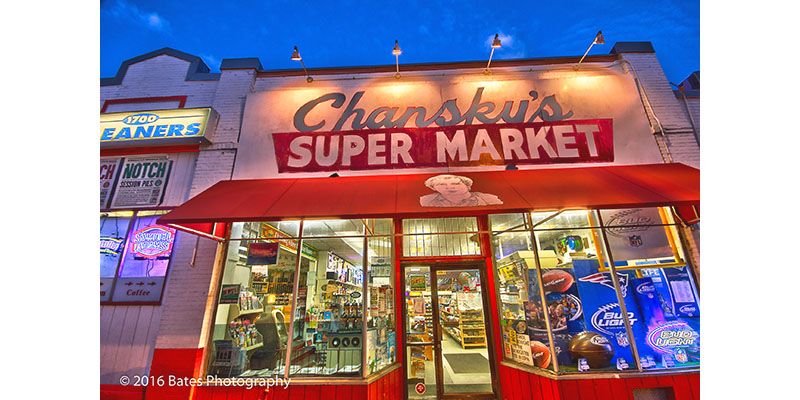 It’s all about that disembodied head.

I walked into Chansky’s Super Market in Brighton, MA, determined to find out what it meant and who it was. But something odd occurred. I asked to speak to the manager, and a man named Lorenzo Bennett replied, “How can I help you?” He told me about the history of the store, its beginnings in 1913 and – accounts differ on this – whether it was a kosher meat market or a Jewish corner store. Well, I thought, surely the owner would know. Could I speak to him? Lorenzo hesitated, looking sheepish. Suddenly someone piped up: “I’m the owner. I’m Doug Labb. I bought it from my father, who tries to stay retired.”

Doug Labb, after initially “staying in the background,” warmed up and told me about his store: his plans to expand into prepared foods and a kitchen, his community ties, and his work techniques, such as the way he “steals [design] ideas” from shops as far away as Australia. He also revealed his struggles with the city to put up an awning, one that would shield the store from the summer onslaught. The city delayed the permit for eighteen months. The Brighton-Allston Historical Society (Aberdeen District) wasn’t convinced that the store should even have an awning. Eventually, the permit was issued.

Now the store has a distinctive and mysterious portrait on that awning. So who is it? It’s not Mr. Chansky, the original owner of the store many years ago. It’s the previous owner, Doug Labb’s father Paul. Apparently Paul, while vacationing in San Francisco, had a street artist paint his picture. Doug liked it so much he hired a sign painter to reproduce it for the new awning. In solving this mystery, I received more information than I’d sought and got a free T-shirt adorned with Paul Labb’s visage.