Flashy Bodega in a Small Town 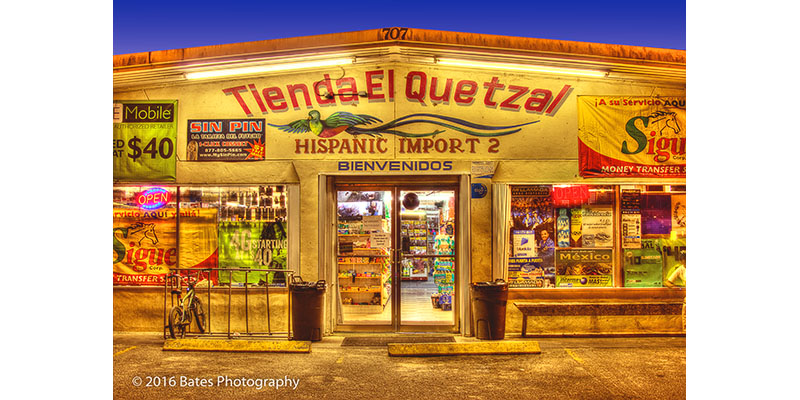 You wouldn’t expect to encounter it here. Yet here it belongs. Immokalee is a poor Florida inland town that is 71% Hispanic and only 3% white. While there are other convenience stores there, Tieneda al Quetzal Hispanic Import 2 appears to be the busiest one. (And the prettiest.)

Gaspar Martin manages the store, which is owned by his brother, a tall striking man too shy to talk to us even in Spanish. Gaspar has worked there five years, since he was sixteen. During our brief talk, it was obvious he’d never been interviewed before. His manner was standoffish, as if he couldn’t figure out why we would ever want to talk to him about his job. There’s nothing unique about it, is there?

Actually, there is. Tienda al Quetzal is named after the national bird (and currency) of Guatemala. I sure haven’t encountered that name anywhere else. As the front sign shows, the quetzal has brilliant plumage and long tail feathers.  The store has the “2” designation because it is one of three owned by the family. The other two are in Bonita Springs and Fort Myers. When I visited the Bonita Springs location, I noticed it had no such creative signage; however, its upbeat Latino music gave it a festive atmosphere that this store didn’t have. And its selection of Mexican and Guatemalan products was equally impressive.

Gaspar often makes the long drive to the other stores, each about 35 miles, without complaining. While the entire adult family works at the store, their young children are not interested in hanging out there. Time will tell, in this struggling remote town, whether they too eventually become employees. Not the worst of fates. Gaspar says he is so happy working with customers that he finds no downside to his line of work.