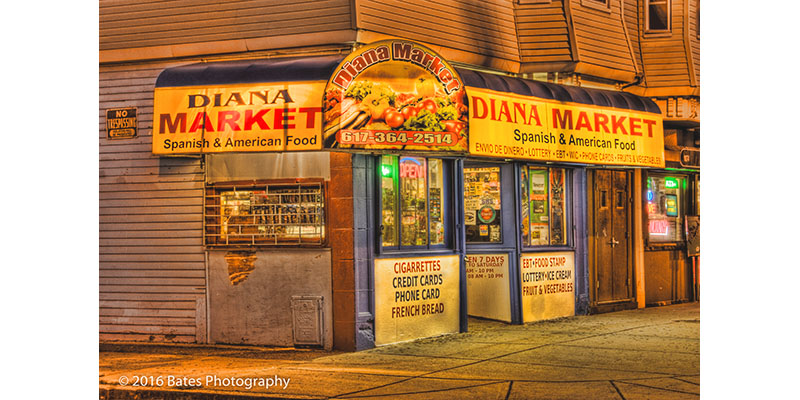 Ask Abdul Khan how he succeeded in becoming the owner of Diana Market, he’ll initially give a typical answer: “Much hard work.” Persist and you’ll find out the real reason: new ideas. Lots. For years he wanted to own his own store. When growing up in Shariatpur, Bangladesh (forty miles from the capitol Dhaka), he worked for his father’s business. There he absorbed the older man’s ideas about working for the public. When he came to the United States in 2006, he worked at his cousin’s bodega in Lynn for two years. There he learned tips about running an American business, like recordkeeping. I knew his store, with its rich colors would make an excellent HDR photograph.

He journeyed back to Bangladesh for family reasons, then returned to  work in Malden, MA. When the opportunity arose to purchase Diana Market in the spring of 2010, he snapped it up. Then new ideas started flowing. He repainted parts of the exterior, then rearranged the whole interior to make the area brighter and more open, so people could find items more easily. Since the neighborhood is primarily Latino and Haitian, the food choices reflect that. “You won’t find any papadums here,” said his wife Rashidul, smiling broadly.

Photo-shoot Note: I often take my long exposure HDR photographs in inner city neighborhoods. I am often asked if I’ve ever been robbed or threatened. No, but the evening I photographed Diana Market came close to conflict. The store is at the corner of a side and a main street. The pictures I take require long exposures. For aesthetic reasons, I try to wait until all the people have passed through the scene. Here’s why: When I was photographing the picture above, a man walked by. He saw me across the side street. “Hey!” he shouted. “Did you just take my picture?” I said, “Not really.” “What do you mean, not really? I just heard it go click!” I beckoned him to come over, which he did. “I pushed the shutter.” I brought up the shot in my LCD screen and showed it to him. “It’s called a time exposure. Somebody walking through comes out blurry.” He leaned over. “I don’t wanna be in no picture.” He looked closer. “This could be anyone,” I said. My photo lesson apparently worked. He walked away and I never used the picture.