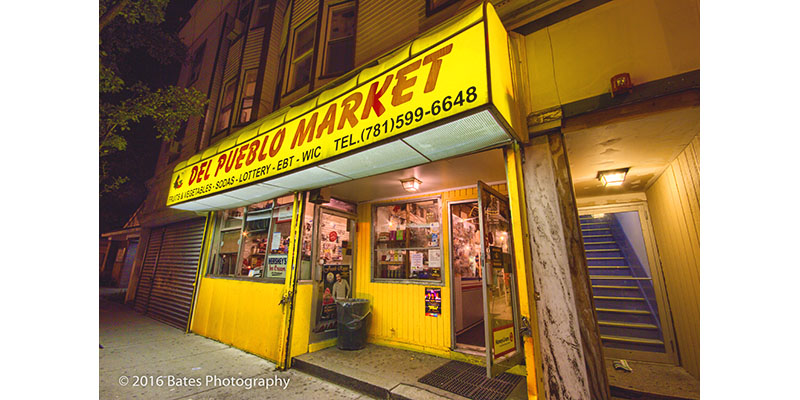 Several decades ago I was a penniless young man living in a third floor flat in Peabody, Massachusetts. Believing I could affect change and meet people, I became a community activist. Although my first aim probably fell short, my second didn’t. I met another young man, Rafael “Danilo” Peña , a Dominican-American whose English was as spotty as my Spanish. Despite glitches in understanding, we became friends for many years. I last saw him in 1989 (but spoke to him in 2016).

Jump forward to 2011. I was touring Lynn for bodegas to photograph. I’d worked there during the seventies, so I knew the streets I trolled. I found a group of colorful stores on North Common Street, not far from where I once worked.

Angel Peña, the owner of Del Pueblo Market, is a pleasant man; however, he’s somewhat camera shy. He did not want to participate in the Bodega Project. I told him how beautiful his store was and how much I though he could add to the project, but he kept declining. Then I mentioned that I once knew a man named Peña who lived in the next town over. His face brightened as he revealed that Danilo was his cousin! That broke the ice. He agreed to talk to me.

He’s owned the store since 1994 and inherited its name (which means “town market”) from the previous owner. He repainted the place himself, choosing yellow because he’d heard it was lucky. Apparently it has been. He and his wife Rosario have raised four sons and they’re all making livings on their own (none at bodegas). He still works seven days a week, 14 hours a day. He knows all his customers, some since they were children. And he’s never been robbed, that in a city where thefts and arson occur far too often. It may appear that his life has not been extraordinary. But to me, the man who grew up with my old friend Danilo has survived–and thrived–in the unpredictable worlds of Lynn, MA and Baní, Dominican Republic.