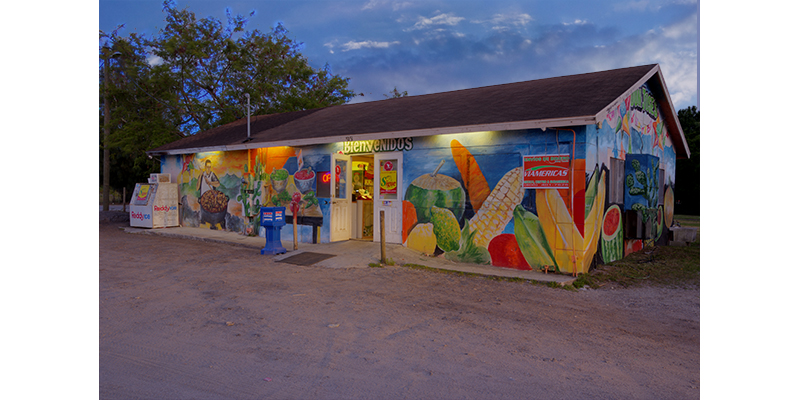 The first time I interviewed Griselda Rocha in Wimauma, FL, she was wearing a tee-shirt that read: “Fear is for Others.” Since she is a second-generation Mexican-American now living in the shadow of Donald Trump’s presidency, this slogan could be more than just a personal statement. She is a pleasant woman, spunky and independent, with strong opinions on topics like working in a family business and the differences between Tex-Mex and her authentic Mexican food (Guanajuato-style). Although she works at José’s Market part-time, she does “everything.” She’s not complaining when she says, “I assist customers, ring them up, stock the goods, and clean up.” She loves the work and hopes to inherit the business someday. Because her father José is strictly “old school” and doesn’t use a computer, Griselda also does all the bookkeeping and online banking. In 1993 he abandoned his unrewarding job as an agricultural worker to open a roadside stand stocked with fresh vegetables and fruit. The business eventually grew into the current store, José’s Market. It now has a colorful storefront, detailing scenes of fresh food and happy customers, painted by professional local artist Juan Luis Colon.

After I photographed it, I discovered that the Rocha family had three other businesses in the immediate area, all food-related: Taqueria Guanajuato, Don Julio’s Cockteles, and the Log Cabin fruiteria. Taqueria Guanajuato is the fast-food stand next door started by José and his son Francisco (Griselda’s brother), and it features authentic food created from recipes learned in José’s home state of Guanajuato, Mexico. Many of his relatives have worked there, including his daughter Griselda and his granddaughter Lucy Rocha.

When the opportunity arose, Francisco bought Don Julio’s Cockteles, a sit-down restaurant across the street.  (It is named after no one in particular and refers to shrimp cocktails, a menu item.) Lucy works there every morning and through lunch, while she studies for her degree in business. She likes running the restaurant with her father and speaks freely about her skills at networking. The family never has trouble finding people to repair or help replace equipment, because “everybody knows everybody around here.” (I suspect nobody burns anybody here too, for the simple reason that a bad rep would be ruinous.) She also gathers business insight from “snowbird” customers, people who live in the area seasonally and enjoy talking to this friendly young woman who eagerly absorbs tidbits they say. Most recently, Francisco bought the Log Cabin next door, an open air fruiteria with local vegetables and fruit, and Latin-American food that includes large bags of chili peppers, quart containers of salsa, hibisco tea, and corn husks. There are even raw peanuts for boiling, southern style.

“Work here is not just a job,” says Griselda, “it’s family. This is where we all gather on Sunday and holidays. It might legally be José’s Market, but we [affectionately] call it el puesto, little market.” As with any venture, there are probably downsides: long hours worked and minor disagreements about this or that. But at these four businesses there seems to be a true spirit of cooperation and camaraderie most likely missing from the Walmart one mile west.