Short Video of Bats Emerging from the UF Bat House 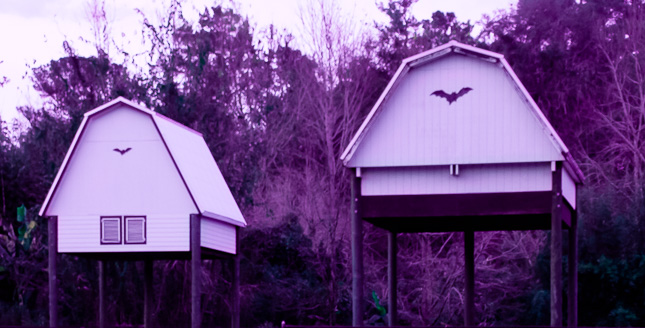 We recently went to Gainesville, FL right after New Years. We saw many creatures. A half million of them, give or take a few hundred.

The University Of Florida in Gainesville had a problem. Their famed sports stadium was home to thousands of bats. They swarmed out at people at inappropriate times, like during night games, and they exuded noxious odors. The decision was made to build the bats three houses where they could roost during the day. It took several years for the bats to adapt to their new abode, but now they apparently love it. Every evening when the temperature is above 65°, the bats swarm out at dusk to go hunting for food. And to mate. They hunt all night and come back in the early morning. Citizens of Gainesville know about this and often bring guests and visitors to witness the emergence of the bats.

We went there shortly before dusk and camped out on the benches. You could smell them, so we knew they were lurking. Then they came. For fifteen minutes we were deluged with half a million bats.

For more info about the bats, click UF Bat Houses.