How I Found Davey’s 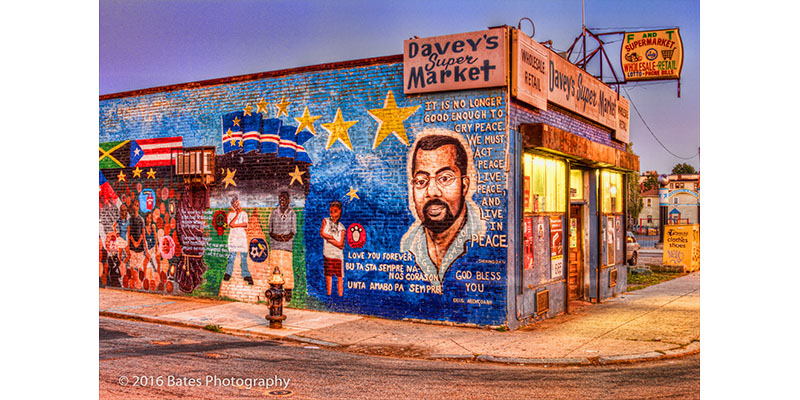 I’m often asked how I find the bodegas that I photograph. Sometimes get an idea of what a particular bodega looks like by trolling online, using a tool like Google Streets. Once in a while that just puts me in an interesting neighborhood and when I get there, I end up selecting a different bodega, perhaps one or three streets over.

However, there have been times in which they drop right into my lap.

I was attending the opening of my exhibit Boston Bodegas and the Immigrant Experience at the Mayor’s Gallery at Boston City Hall in 2010. I was a little concerned that the opening wasn’t that well attended. Then the man behind the desk at the Mayor’s Office, Emmanuel Fidalgo, said that he’d been receiving great comments about my show from visitors. (The show had been up a week already.) Then he said that his mother, Anna Maria, also had a bodega on Dudley Street in Roxbury, MA. I later looked it up on Google Streets and saw that it had a colorful mural, but there didn’t seem to be enough light to photograph it at twilight. Nonetheless, I called Emmanuel, said that I’d like to take a look at it, and asked him to tell his mother I was coming.

A week later, my wife Cheryl and I arrived a few minutes before sunset and realized that I’d been right. Davey’s Super Market wasn’t a candidate for well-lit-store-during-blue-hour (20 minutes after sunset). So we quickly photographed the building in the waning light. There was much traffic that night with cars mucking up my view, so it was difficult.

Then we interviewed Anna Maria, who told us her harrowing tale, which is in the video. I won’t tell you anything more about her, other than I sent her a copy of the photo and she never responded. But I never expect that. Owners rarely do. They’re just too busy.