Taking the Plunge for Mubarak 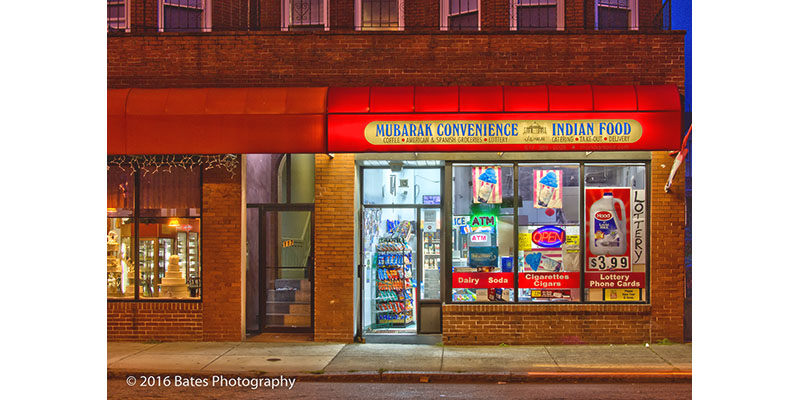 There comes a crisis in every small business owner’s working life. Should they quit the day job and take the plunge into a new business, abandoning financial security and risk not being able to support the family? Or should they continue with both jobs until there was enough money for a hard-times cushion? The second decision sounds sensible, safe even, but how many have the energy for it? And for how long? Owner Mohammed Shahabuddin faced this Rubicon a few years back and decided to take the plunge. A few months after opening his newly purchased bodega, he quit his long-time job as a waiter at Boston’s Copley Plaza Hotel. A good decision, it turned out.

Now he has “more freedom,” the prime reason cited for the store’s existence. “No more ‘do this, do that,’” he said, wryly repeating the anthem of every employee who’s ever worked the service industry.

He made one mistake. Not only did he stock Indian and Spanish groceries, he started serving hot Indian food. He had been a cook before he was a waiter and thought “I can do this!” How hard could it be to transfer his skills to providing hot food? Very hard, it turned out. Too many obstacles. The residents of this working class suburb of Boston prefer fast food, not Indian delicacies, so he hung up his ladle. So how’s he doing, business wise? As well as can be expected at the beginning stages. “Not too bad, not too good.” But he has help, it turns out. Himself. He hails from Kishoreganj, Bangladesh, where he was a carpenter until 1990. That skill serves him well today. When he got the store, there was much remodeling needed and he did it all. He still does the repairs when they’re closed, saving much money on labor costs. Like many in this business, he works 14-hour days 7 days a week, His wife Musammat Sadarbanu and son Kabir Uddin sometimes help out on weekends.

Mr. Shahabuddin wanted me to do something about the sign, which he knew would appear in my photograph. It still proclaims “Indian Food,” his defunct hot food service. Could I possibly remove the wording with Photoshop? While I appreciated his faith in my skills, I couldn’t do it. People will just have to read this article.