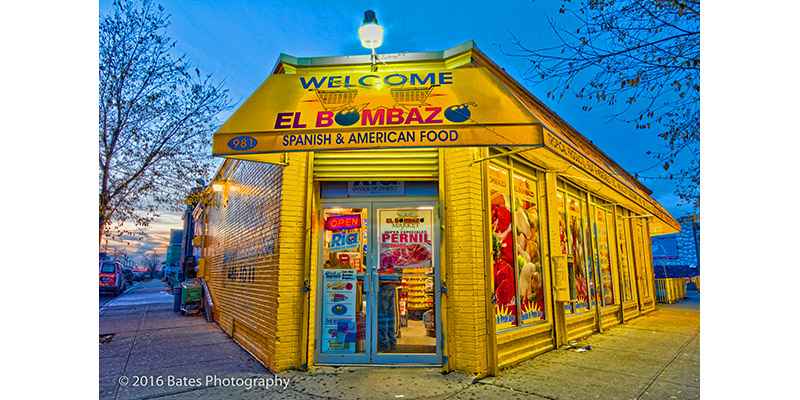 Juan Jimenez named his store El Bombazo (“The Bomb”) because “back home there were a number of stores named that, and they did well, so maybe it works.” Back home is Moca, Dominican Republic (11 miles from the country’s second biggest city, Santiago De Los Caballeros). His large market, which he co-owns with his brother Pablo, now specializes in meat, but started as a small bodega in 2003, then expanded.

He designed the colorful signs on this corner-style building and came up with its sunny yellow color. I sent him the picture I’d taken of the store at twilight and he liked it so much he used it on his Facebook page (pictured above).

His success has inspired him to plan for the future, in which he’d have more stores, “even a supermarket someday.” Hopefully there they would continue to have pastelitos, which are tasty meat-filled patties.

I was unable to film Juan, because his wife was having a baby and he needed to be with her. Also, his hours are sporadic, so the chance that he’d be in Providence on a day I’d make the trek down there was slim. After several attempts, I finally got him on the phone and connected, resulting in this audio interview.