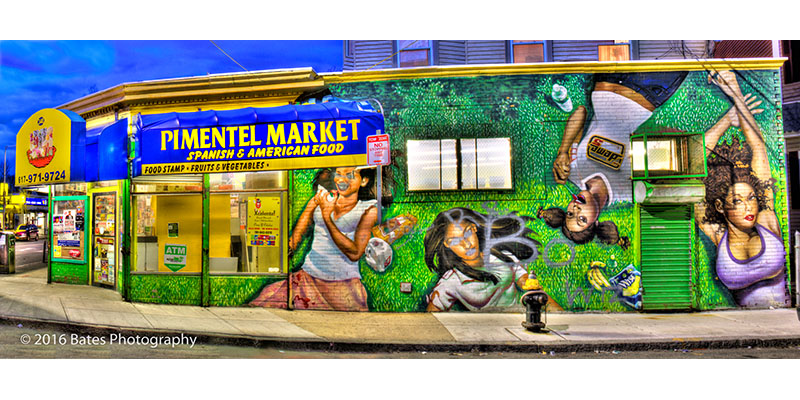 I didn’t know how this bodega got the name “Pimentel,” so I looked up the Spanish word and found it meant “pepper patch.” That made sense, I thought. Groceries, peppers. Then owner Alvin Guerrero told me that the last name of the previous owner was “Pimentel.” Embarrassed? What, me?

The distinctive mural of attractive women lying on grass was not his idea. A local artist entered one day and pitched the idea to him. He liked it, and was somewhat chagrined when I handed him the picture I’d taken. “Oh no!” he said. “They graffiti’d it!” Luckily he still has the name of the artist, who can probably patch it up for him. (As of May 2015, it has been fixed up.)

I later found out from a local barber that Mr. Pimentel, who’d worked hard to establish the bodega and make it a viable business, retired at 69, then died six months later!

I hope this is not Alvin’s fate and that he doesn’t end up working too hard at this most colorful of bodegas.