Spicy Chicken in a Wimauma FL Store with Two Names 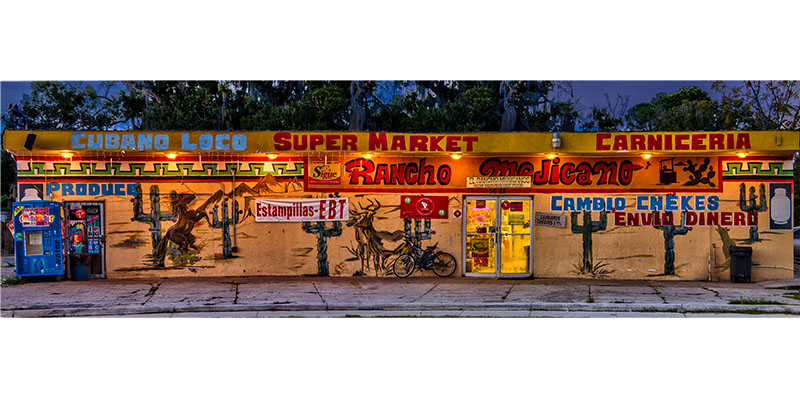 Bold blue letters in the store’s sign seem to indicate that its name is “Cubano Loco” (Crazy Cuban). Or do they? According to manager Salah Hijaz, that’s no longer its name. It’s just not worth the trouble to erase. Now it is called “Rancho Mexicano” (Mexican Ranch), its rich palate of yellows and browns applied in 2009 by a local artist named José. Salah’s cousin owns the store, but doesn’t work there.

Salah has been managing the store since 2009. A Palestinian, he worked construction in Israel before coming to the United States in 2007 for better work opportunities. Unlike many bodega owners who praise only the independence of the work, Salah says that he mainly likes his fellow workers and the customers, many of whom are migrants on the tomato farms. When Salah’s cousin bought the building, they turned it into a combination grocery store and carnicería.

Unlike many bodegas staffed by one employee, El Rancho Mexicano has at least five staff members working at all times. This means they can provide extra service. A roasted chicken order is painstakingly wrapped not just with the bird, but two huge, equally roasted jalapeño peppers, and – in case this isn’t enough heat – a further spicing via plastic containers of green jalapeño sauce.