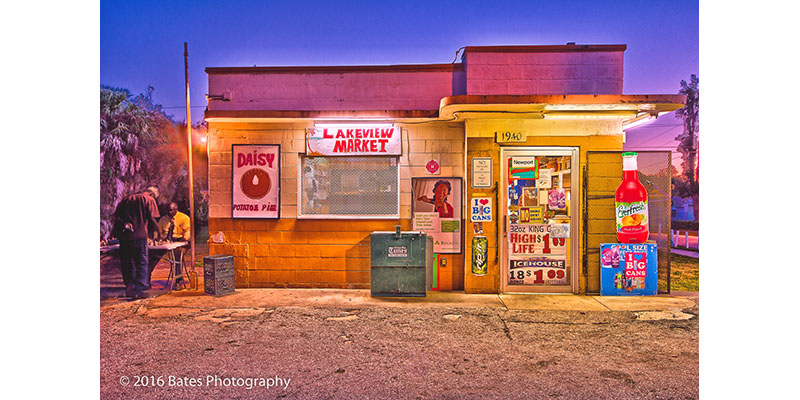 When I first entered Lakeview Market, owner Daisy Swinton was handing a customer a large Styrofoam cup filled with boiled peanuts. As a transplanted Northerner, I haven’t worked up to this dish yet. But boiled peanuts is not her specialty. That happens to be pies. Delicious pies: coconut, pumpkin, and as the sign says,”potatoe.” During Thanksgiving 2013, she baked over 300 pies. “Sold them all too,” she says proudly. The key ingredient, she says, “is love. You gotta put the love in, then you don’t have to change the ingredients.”

She has run the store since 1987 (when she inherited it from her father); previously it had been owned by a man from New York City named Blackie, who who called it . . . Blackie’s. The man still visits the area every year and stops by “to make sure the building is still standing.” Prior to owning the market, Daisy’s father managed it for about three years. It was he who change the name to Lakeside Market. Helping her run the store is her son Anthony, a hyperactive young man, pictured playing speed chess on the left. She hopes someday he will run the store himself. Daisy says that she’s on excellent terms with the neighborhood. Often people stop by to make sure everything is all right. “They look after me and I look after them.”

While I was interviewing her, she waited on a young girl whose purchase came up seven cents short. Daisy gave her the item and told her to bring in the difference next time. Someday, she hopes to travel, but now hers is not an easy life. She works 12 hour days, seven days a week. “There’s advantages and disadvantages,” she says. “I’m waiting on the advantages.”