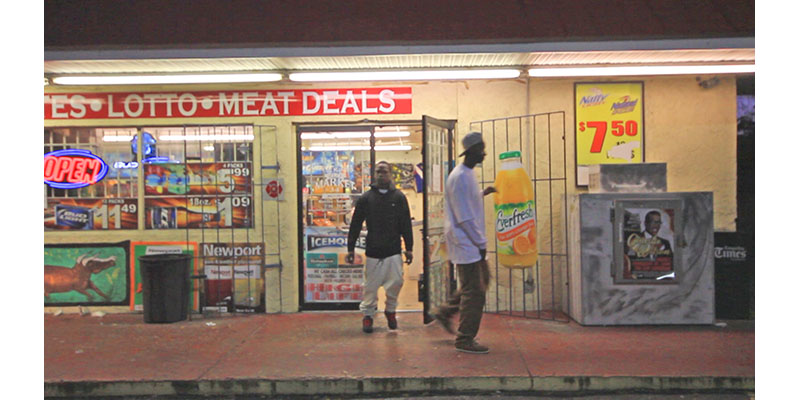 Photographing bodegas at twilight is like catching bullfrogs in a swamp. You spot one, you sneak up on it, and just when you think it’s within reach, it leaps away from you with a taunting bullachachunk! It may not be apparent from the photos, but there is precious little time to capture an image with no cars in front of it and no rushing people interrupting the fine lines of the most rustic bodega.

You may think a blurred customer rushing into the door would add dynamism to the image, but these are HDR photos I’m taking. Each final image is made up of up to seven separate images. A blurred customer in one shot becomes a nasty ghosted image in the composite. It must be avoided or painstakingly Photoshopped out. And since some shots are up to thirty seconds long each, it’s the rare bodega that doesn’t have somebody about to enter it to avoid a line or leave in a rush to get home and scratch that roll of tickets.

I once photographed a bodega in which a customer parked in front of the store in a sign-obscuring truck for the entire time of blue hour (about 20 minutes). When he finally left, he shrugged at me as he unlocked his car. I got the shot just in time. Two more minutes and the sky would have gone from royal blue to funereal black.