Not so Lonesome at Florida’s Fort Lonesome Grocery 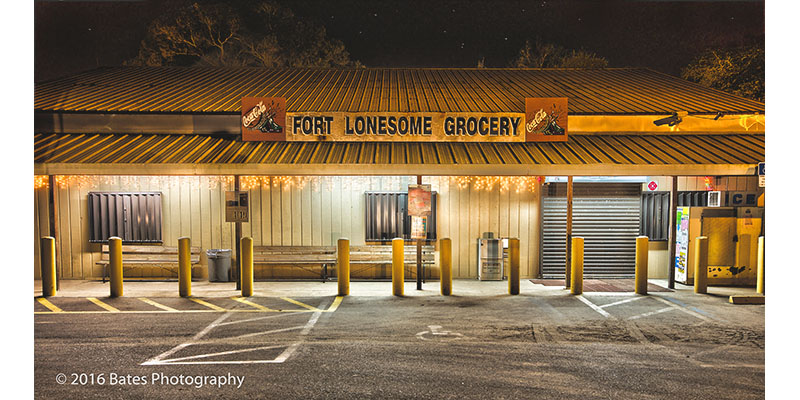 Where does the name come from? Was it ever a fort? And why is it lonesome? These questions knocked around in my head as I drove east toward Fort Lonesome Grocery after dusk, determined to see what this bodega looked like under the stars. I’d seen it during daytime and it was only marginally impressive; but at night, my intuition rewarded me: it surpassed my most surrealistic dreams. Back in the twenties, the corner of State Road 674 and County Road 39 was indeed desolate. The building now occupied by Fort Lonesome Grocery was first a federal inspection station constructed in 1929 to combat the spread the Mediterranean fruit fly. One bored inspector hung a sign reading “Fort Lonesome.” Although it was never a fort, it had another distinction. It was the only “Buggerman’s Corner” in the world.

Fast forward to 2008. Fort Lonesome was bought and is now owned and run by Narendra “Nick” Patel, a hardworking man who originally managed a hotel in climatically similar Arizona. He proudly claims that his grocery is the only one for ten miles around and that he added gas pumps to it. It is where loyal truckers and neighborhood denizens purchase hot food, simple hardware items, road provisions, even a decent cup of tea or coffee. It is a true general store, and it serves the community of Lithia with a wider variety of grocery items than the average bodega.

Nick may not know all the historical details about Fort Lonesome, but he does know an attractive name when he encounters it. He has scores of colorful “Fort Lonesome” tee-shirts for sale, which he designed in white or black letters that perfectly match the color of the fabrics. And is he ever lonesome? Hardly. As the interview’s myriad interruptions clearly show, the remote outpost is frenetically busy most of the time.