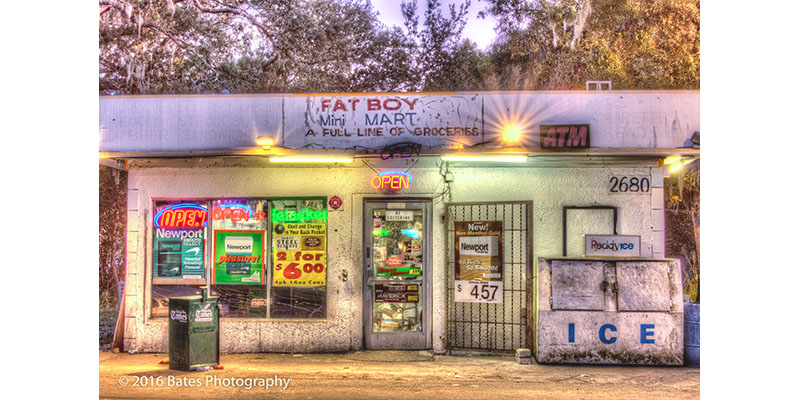 Sometimes getting people to talk is worse than pulling teeth. At least with teeth, you have an end result to show for it. I was giving up hope of securing an interview with anyone at Fat Boy Mini Mart. Nobody ever answered the phone. I’d made the trek to St. Petersburg twice after photographing the store, free picture in hand. Both times I “just missed” the owner Mike Samur. The timid cashier wouldn’t talk to me. When I finally caught up with Mike, he said he was too busy (but did pose for photographs). Although he gave me his cell number, he never returned my calls, either because of shyness or language difficulties.

I showed up at Fat Boy one more time at 9 AM, determined to interview at least one customer. Instead I encountered the store’s cook, who goes by the name Bumpsta Baby. After finding out that I was not a cop, he spoke to me at length about his passion for the art of cooking.

Despite its scruffy appearance, Fat Boy is a true corner grocery store and serves the community so well that it’s always busy, particularly later in the day. Bumpsta said he often feeds hungry kids who have no money, giving them french fries and footing the bill. He’s been the cook longer than Mike has been the owner. After 16 years, he’s thinking about opening his own restaurant. He may or may not succeed, but if enthusiasm is an accurate indicator, he will at least give it a go.