No Picnics, Plenty of Food, but Much Dissatisfaction 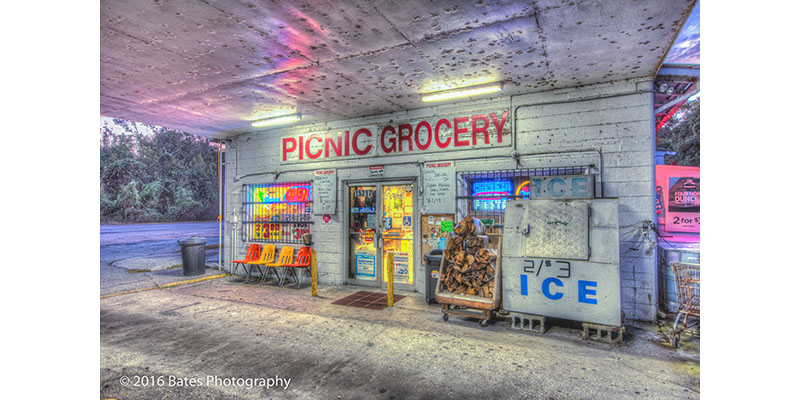 Picnic Grocery. Where did it get that name? Owner H.D. Haque says that the area around his Florida store was once used as a picnic campground for both locals and visitors. The store was built around 1947, moving its wares from the shack out back. Even though the area is no longer use for picnics, the intersection of County Road 39 and Lithia Pinecrest Road (Route 640) is now and forever known as Picnic Corner.

It’s located in the sparsely populated country town of Lithia, Florida, twenty-two miles east of Tampa. The town’s history includes agriculture, saw mills, and phosphate mining. Here Haque stocks up on typical general store items, but provides a little extra. By himself all day, he makes sandwiches when things slow down: breakfast sandwiches with bacon and egg, then pork-filled Cuban sandwiches and other meat items for the rest of the day. “Sell them all too,” he says proudly, standing over the packed sandwich display case. He also sells cold beer, snacks, as well as grocery items like juice and bread. There’re a few cowboy hats hanging on the walls. An entire panel is devoted to fishing equipment. Outside he has a bait bin with live crickets and worms for fishermen of Hurrah Lake in Alafia River State Park. There’s even a gas pump outside that sometimes provides gasoline.

Running such a store takes its toll. Haque works from 6 AM to 6 PM, seven days a week. When asked if he ever goes on vacation, he replies “sometimes I play pool after work.”

It’s not an occupation he has in mind for his daughter, now in high school. Ruefully he adds, “not much of a life, huh?” I disagree. His busy life provides a sort of community service. And he has status, in a place where all customers know him well and trust him. It’s him they go to pick up a half gallon of milk, to bait their hooks, and sometimes stay to chat with.

From Facebook, 8/9/2015: “IF ANYONE INTERESTED BUYING THIS STORE, PLS INBOX ME MAKE AN OFFER…..ASAP….TNX.” Apparently someone was interested and bought the store a few months later. Then sold it again less than a year later.