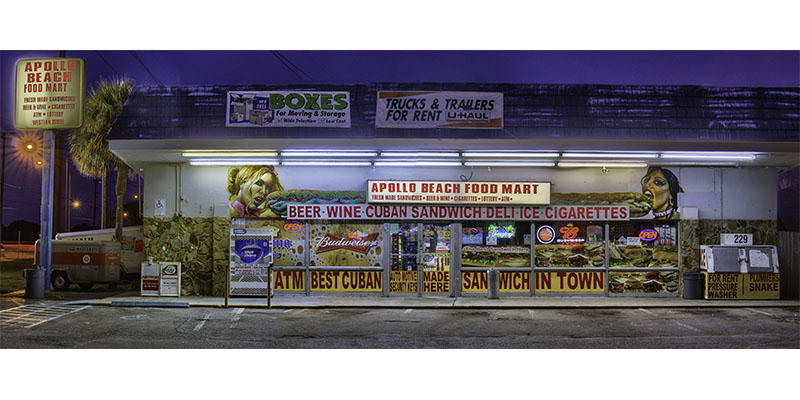 Your first impression of the Apollo Beach Food Mart would probably be its murals. Small wonder. They are brash and stunning. A few years back a customer approached manager Rocky Ayoub and said he’d like to paint the outside store walls.

When Rocky expressed interest, the artist drew a mockup of a grand submarine sandwich feast. Upon approval, the artist executed a huge colorful work. Two sets of two women consume gigantic submarine sandwiches. In front, the women are so stylish they look like rock video extras. (One even has a brow ring.) The middle of the long sandwich is obscured by two signs, one of which re-announces the sign on the left, “Apollo Beach Food Mart.” On the side mural, two other women also gnaw on a sandwich. They are plainer but more surreal: They have no bodies. And they are equally hungry.

It’s a family business. The owner is Rocky’s wife Zianate; chief sandwich maker is Leo Ayoub, his nephew; his brother Fred Ayoub runs the store for the second shift. They are, in Rocky’s words, all “from Palestine.” Working at the store for the past seven years, Rocky and Fred got their experience in the trade working in a Tampa store. Two days a month, Rocky also works at the Websters Westside Flea Market in Ocala, two hours away. He sells cigars and finds items to bring back to the Apollo Beach store.

Do the two brothers have plans for the future? Will they expand the store or perhaps open another one? “Not really,” says Rocky. “We’re busy enough around here.”

The first problem I had been encountering at blue hour, while photographing during darkening skies, was that it was becoming increasingly difficult to see my camera controls. Before the shoot, I purchased a Petzl Tikka 2 headlamp, which I used to both illuminate my way around the parking lot and warn drivers of my presence. More details here.

The second problem was parked cars, the bane of architecture photographers. My tactic in the past had been to simply wait until the driver had completed their business and came back out. But that didn’t always work too well. While photographing Baker St. Market and Deli, a car parked directly in front of the store for nearly twenty minutes. I almost lost all of the rich lighting that blue hour was offering. My solution now is to be aggressive. My companion and I approached the owner of the adjacent store and asked him to move his car. We were doing a documentary shoot of the building and the client (a future publisher perhaps?) had asked us to keep parked cars out of the shot. In short, we acted like paid directors of an expensive film. And it worked. (Maybe the headlamp I was wearing gave me a professional look.)