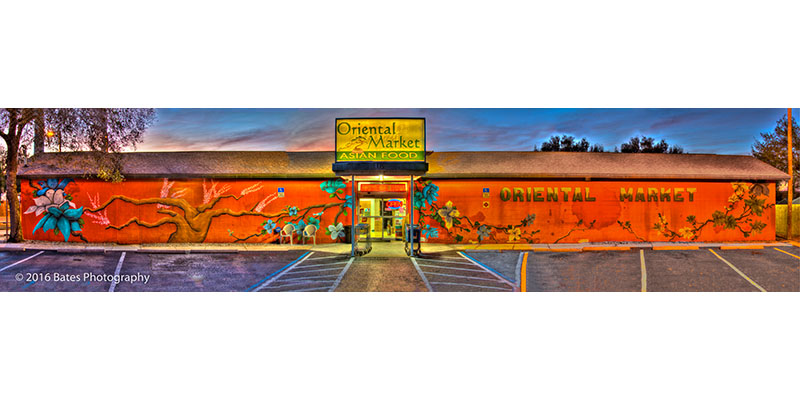 The Brandon Oriental Market mural is a near-perfect blend of commerce and art, with a bit of charity thrown in. When George and Kim Ness moved their mall-situated store to this standalone building in 2009, they knew they had to address the situation of the stark white wall. Not only was it ugly, it didn’t attract business as well as it should. Soon afterwards, they were approached by an out-of-work artist who offered to paint the building in an eye-catching way. They were moved by this eager man. “We felt sorry for him” says Kim, “He didn’t have no money, he didn’t even have a telephone.”

He showed them traditional oriental drawings he’d use as a model, so they contracted him. It took three weeks and they paid him well. George wanted the background bright orange for two reasons: “First, there’s an oriental tradition to use bright colors,” he said. “Also, it’s easy to see from the main road hundred yards up the street.” More than once, he’s given delivery trucks directions that say “Bright orange building, you can see it from Route 60.” And it works.

George wants to retire, so he’s open to offers to buy. At 66, the seven-day-a-week grind is getting to him. “You feel like you’re in prison, chained to the business. I haven’t had more than three days off since I owned it.”

After six years, the facade is showing its age. It needs repainting. Will they re-contact the artist? They would if they could. Like a cowboy from a forties movie, he just appeared in their lives one day, worked a few weeks, and then disappeared. Forever. They don’t even know his name.

To learn how I photographed this long building, go here: