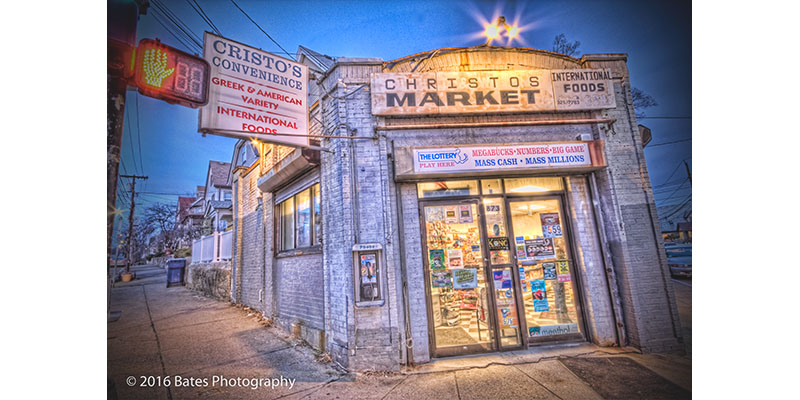 What’s with the two differently spelled names? And why did such a busy store in Roslindale, MA close? Read on.

First, how does a businessman with difficulties speaking English become a successful bodega owner in the United States? One word: family.

Mafatbhai Patel apprenticed for his uncle in the state of Gujarat, India when he was 16, and eventually owned a thriving wholesale business. He was persuaded by his brother to sell the business and come to the United States in 1993. He owned his first store in partnership in Brockton, MA where he learned the ropes of American business. Within a year, he sold it and bought a larger one in Brighton, got it running and turned its management over to his son Andy. Soon after that, he acquired a market and liquor store in Watertown, both now managed by his son Gary. His third son Sanjay then joined his thriving businesses and manages the recently renovated Henry’s Variety a block down the street.

While language is still a problem for Mafatbhai, his family is always there to help him. Even though he is semi-retired, he still visits his stores and pitches in to help.

The two spellings (Christos/Cristos) of the market was an error of the original owner.  “We’re aware of that,” said Sanjay. “It’s just not worth fixing right now.” A year after this interview, Christos Market closed permanently. Mafatbhai retired and the family decided that one store in the area was enough to manage. This closing of a popular and photogenic store made me realize that when photo-documentary opportunities present themselves, you must grab them or they disappear.

Photo Tip: When to Vignette

When I first processed this picture, I noticed that the street signal in the upper left was too bright. Also, the car near the bottom right didn’t add much to the scene. Normally I wait until cars disappear from view before photographing, but this time, it appeared to be parked there overnight. What could be done? The picture satisfied me in all other ways.

I decided to apply a vignette effect. It’s a trick I rarely use on photographs because it is so easy to overdo, like over-sharpening or over-saturating. In this case I had to apply it twice because Photoshop is very conservative even when applying this feature full strength.  I believe it successfully muted the effect of the two distracting elements.