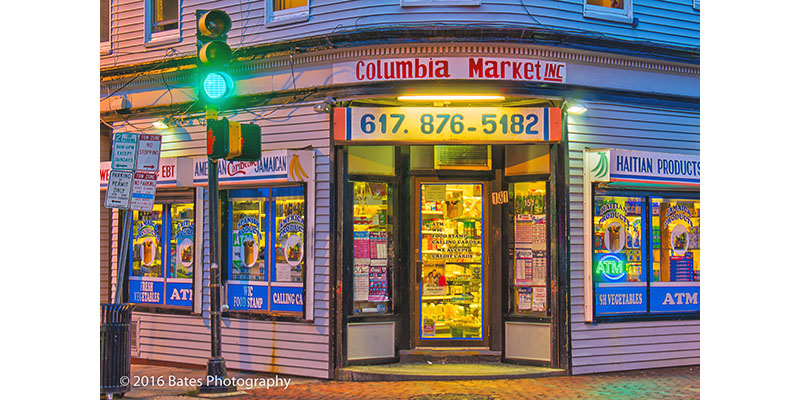 The dream to succeed is a huge hungry pet. A St. Bernard. A Great Dane. It has to be fed often and a lot. For some, this is merely challenging, for others, impossibly hard. “It is what it is,” dreamers say. “Let’s go for it.” René Peña wanted his own bodega so badly he worked two, sometimes three jobs for Boston cleaning services, like his fellow Dominican Raphael Peña of Yessenia’s Market did. These contracting services clean businesses after hours and require their employees to do backbreaking work. The mops are big and sloppy, the pails so heavy they’re mounted on wheels. Even then, they have to be lifted and drained over high metal sinks. René did this work for ten years, for a daunting eighteen to twenty hours a day.

Drudge work didn’t stop when he bought his first bodega, the Columbia Market in Cambridge, MA. There were orders to fill and long hours to stand behind the counter while the business was getting rooted. After twelve more years, he heard through his network about another bodega for sale. In Portland ME, 106 miles away. Not only did he buy La Bodega Latina, he moved up there. The right side of the building is used by Flores, a Salvadoran restaurant, even though the bodega’s sign hangs near its window.

René divides his weeks between bodegas. While managing the Cambridge store, he stays with relatives. In Portland he gets to work near home for a few days. Nevertheless, he’s cavalier about the hellacious commute. “It’s just two hours. I listen to music, get on the phone, put through orders, talk to friends in my country.” The long hours slowly pass while he’s on the road, usually late at night. He shrugs them off like the empty boxes he discards out back. Everything in this life he chose–its independence, its increased income, its sparse free time, and the inevitable family tension– it all comes with the territory. Yet he still has his sense of humor. “Used to be I needed a week off every three months, now it’s every two months!”

I wonder: does he take it? My guess: not often.