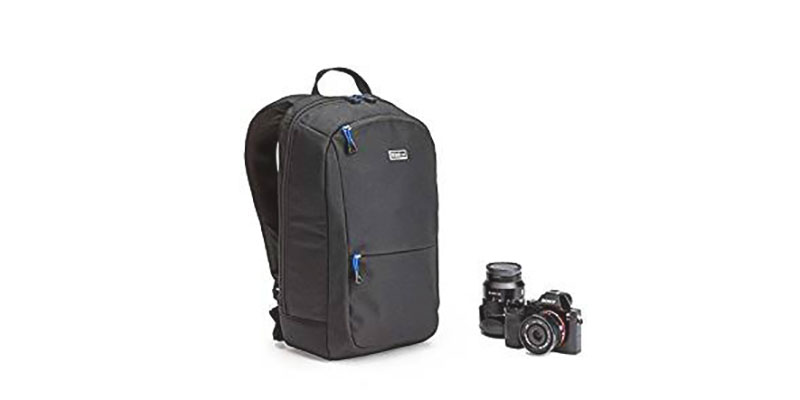 You’d be forgiven if you thought the “Perception Tablet backpack” was for transporting tablets. The Think Tank company actually designed it for mirrorless cameras. True, there’s also a pocket for a tablet computer, both medium-sized (iPad Mini) and full-sized (standard iPad). That works, even there’s no zipper on that interior pocket. There’s really no chance it’ll fall out unless you shake the bag upside down.

How good is this mirrorless camera backpack? I’ll get to that soon, but first, let’s backtrack. Mirrorless cameras, like the “micro four-thirds” models (the Olympus OM-D E-M1) or the APS-C sensor models (the Canon EOS-M), have one big advantage over the standard size DSLR’s: They’re smaller! As such, they do not need a bulky camera bag in which to lug them around. So for the Think Tank people, there’s obviously a market out there.

For a small camera bag, it has mucho pockets. There are two zipped ones on the outside for items that need quick retrieval, like batteries, sunglasses, and SD cards. And there is an interior zipped one, a bit larger, that could hold your infrequently-accessed items, like microphones and cleaning cloths. There are also the ancillary pockets that most camera packs have, like the one for a pen (or lenspen) and the one for backup SD cards. Impressive.

The exterior straps appear sturdy, with a buckle in the front to prevent the bag from getting ripped off in a crowd on an unfamiliar street in an unfamiliar town. I like the tuckaway loop at the top, which can be deployed to slip one leg of a small tripod through. Two nice features.

Under the interior pocket assembly, there’s space to put a well-bagged sandwich and inflatable pillow, or the included rain pouch that fits over the top, in the event of a downpour.

This interior pocket assembly easily fits a mirrorless camera with kit lens, and an additional small lens (or similarly-sized gadget like a Hoodloupe). You can adjust the divider between them and use the detachable small pocket for something like a small flash.

Yet here is where the designers may have missed a beat. Many owners of mirrorless cameras use full-size camera lenses, which they then attach to their small cameras with special adapters. The interior pocket assembly can’t quite accommodate a zoom telephoto lens like the Tamron 16-300. (It lists to the side.) Instead of the detachable small pocket, Think Tank designers should have included a long lens pocket (which could also be detachable). There is certainly room for it in the space between the bag top and the top of the interior pocket assembly.

Despite this oversight, the Think Tank Perception Tablet backpack is a light and handy traveling backpack, far better than the hip packs I’ve seen (and used) recently. If you don’t have a long lens & adapter for your small camera, it is ideal.