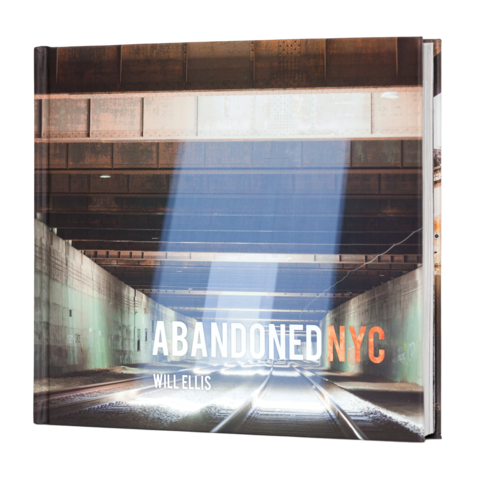 Abandoned NYC is not so much a collection of photographs as the completion of a daunting task. A classic photo-documentary project, the book takes the viewer through the dark ruins of America’s famed metropolis and provides cogent textual accompaniment along the way. Somehow photographer/writer Will Ellis gained access to fenced-off sites and closed buildings to take pictures of both their outsides and insides. Through his photographs, we get to see the wrecked Floyd Bennet Field military installation, the overgrown P.S. 186 School, the once glorious Grossinger’s Catskills Resort, the ceiling-drooped Harlem Renaissance Ballroom. Photographing urban decay is not just a discovery trip but a genre unto itself. Urban decay photographers may not know what they’ll find around the next corner, but they proceed ahead anyway, knowing that it will most likely be awesome. They endure the weakened stairs, wet weeds & spindly trees, and stenchy rooms that nature’s busily reclaiming.

Many of the photographs in Abandoned New York are so striking they stain the mind like the walls of Creedmoor State Hospital’s Building 25. That edifice is, in Ellis’ words, “one of the strangest places in the city.” After 40 years of neglect, and too many open windows, the rooms are strewn with pigeon poop. I’m not talking about the occasional white stain that lands next to you during a summertime lunch break. I’m saying there are piles of the stuff all over the floor, in one case almost burying (perversely) a toilet stall. Another shot displays a four-foot pile in a lecture hall chair, resembling a fuzzy horror creature about to lurch. The New York City Farm Colony reveals a room, a “wreck of splintered beams,” in such perfect tan monochrome that your second thought is that it could come crashing down any second. The Letchworth Village hospital morgue may creep you out with its slabs extending into darkness, but there’s also that room they’re in, painted in retreating lime green. The Bronx’s North Brother Island reveals a hallway whose white walls are “splitting at the seams” and look like sheets of ice. There’s a tattered tome on a table that might have made interesting reading, but Ellis warns that it’s “filled with mundane details.” Shucks. Not all the pictures are well-composed, for how could they be in such surroundings? The viewer may ponder that a crusty spiral staircase could have been an impressive structure decades ago. Bu it’s the shocking levels of decay that are on display here, not architectural niceties.

That is not to say some of the pictures couldn’t have benefitted from different photographic techniques, either when taken or afterwards in post-processing. The dining hall photograph of the New York City Farm Colony has a mixed-lighting situation going on, burned-out details that would lose it points in a photo club competition. Perhaps it could have been more evenly balanced with an HDR (high dynamic range) program, had Ellis taken the requisite minimum of three bracketed shots. The same situation arises with the green railroad track view at Fort Tilden, with its dark corners and over-bright grating to the outside. Some of the flash shots could have been less jarring, had the photographer bounced them from different angles.