The Store that Offers the Unexpected 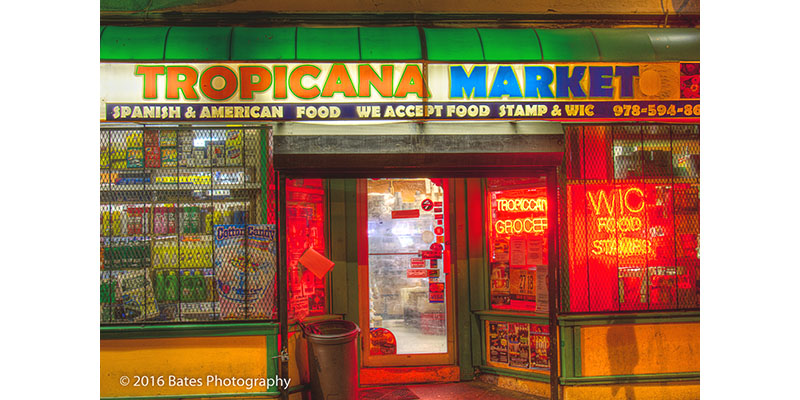 So why wouldn’t the man with the handsome face and muscular physique pose for a candid portrait at his Tropicana Market in Salem, MA? It’s not as if owner Francisco Peralta is shy.  He didn’t pause for an instant when I asked him about his store’s name. Was it inspired by the orange juice company Tropicana Products, also based in Massachusetts? He looked at me quizzically and said, “It means ‘tropical.’ Our foods are tropical.”

But “tropical” doesn’t just mean bananas and coconuts. It also refers to pastelitos, Dominican meat pies that Peralta makes and sells in the store. Although he has owned the store since 2009, he was a master cook for fifteen years at Victoria Station, a tony waterfront restaurant on Pickering Wharf in Salem, MA. While his mother Jacova works the cash register, Peralta wraps the pastelitos by hand, then sends them off to a friend who bakes them at a nearby restaurant. When they return, they’re displayed prominently at the front counter, where they go quickly.

Many bodega owners hope that their children will get higher educations and avoid the hard life working in a bodega, with its long hours (10 to 12 hours a day, minimum). Yet Peralta hopes his three teenage kids will join him in managing the store when they grow up. He doesn’t fear the community, which can be rowdy at time, especially in the summer. He’s never had a robbery, because they respect him. “They’d better,” he said, flexing his muscles.

Despite his striking Taino features, Peralta would not pose for me because, he said, “I don’t like pictures.” (Apparently Jacova doesn’t like them either, waving me off saying she hadn’t had a chance to tidy up.) Personally, I think he’s never had a skilled photographer tap into his unique style while working at the store that he manages like one of those tight ships in Salem harbor.

Photographic Notes: Because I didn’t get Mr. Peralta’s (or his mother Jacova’s) permission for a photograph, I had to find another aspect of his store that was notable. I was immediately drawn to his pastelitos, baked puff pastry-type delicacies filled with sweet or savory fillings (like guava, meat, cheese, pineapple, and coconut). But they were under a harsh florescent lighting that made them look very unappetizing in a photograph. I had to color-balance them in Adobe Lightroom to produce what you see above.