Abandonedfl.com–More than a Trip Down Memory Lane 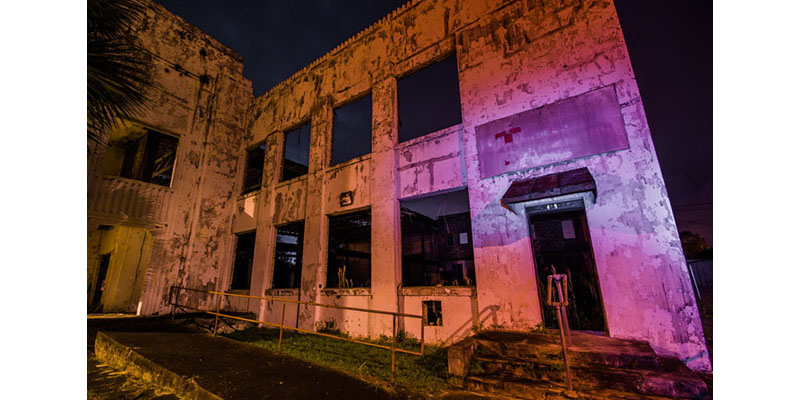 If you live in Florida and take pictures, you may have noticed a certain type of picture preferred by many amateur and semi-pro photographers. Landscapes and nature shots. I like to call it “pelicans and sunsets.” If you belong to a local camera club, you’ve seen more than your share of perfectly exposed, perfectly composed boring shots.

That is how David Bulit’s Abandonedfl.com blog can march right in and steal your attention for hours on end. Photographically, you can’t think of anything else. You may even be tempted to try shots like his yourself.

When you visit his site, you are greeted by an impressive page of thumbnails that seem to scroll on and on. Each is a representative shot of some place he’s visited. A cluttered room strewn with broken wood. A rusty life-sized dinosaur. A huge devil head about to bite a car. An old motel sign, its “Vacancy” lettering still intact. And they are all about one thing: decay. The forgotten, the off-the-roadway, the hard-to-get-to. Most of the shots are his (although the ones of Cypress Gardens are archival and Bulit appears to welcome the occasional contributor). When you hover over these intriguing thumbnails, the name of the place and the posting date appear (but oddly, not the location). You can’t help but click to see more. They are riveting and unexpected, like the Underwood Motel posting. It shows an old postcard image of the iconic sign in its heyday and a 2010 image by someone named “Michael J. Scranton.” Like every other site he visits – there appear to be over 100 – he provides helpful and informative documentary text about its history. He’s a good writer and doesn’t waste words on “artspeak.” After you arrive at a typical posting, the real treat comes. At Underwood Motel there are twenty-seven pictures of the site, indicating that he somehow got inside and shot every accidentally odd configuration he could find. There’s even an old toilet surrounded by plaster shards. Click on one of the pictures and a gallery-style popup appears. Most of the pictures are in sharply textured color, although Bulit has chosen to present some in black & white. All but a few have been taken in daylight, probably for obvious reasons. However, there are some mysterious night shots of the Hastings Community Center buildings, one of which is lit by grimy yellow and purple. I half-expected spooky full-moonlit shots of other locations, but maybe that’s just me and my night photography proclivity.

The WPZOOM theme he purchased for the blog is a good choice. It showcases the work admirably, particularly the way it uses popups animation for photo displays, allowing viewers to scroll through the relevant pictures at their own speed. No dictatorial timed slide-show here! There are two quirks in WPZOOM’s use of the featured image, the one that appears at the top of each post. (Unfortunately, they are not unique quirks.) If the picture you choose use is not in the “correct” proportion (like 2:1), it will mercilessly crop it the way it wants. Possibly Bulit likes this random effect and has chosen not to override it with Photoshop’s Canvas feature. Not so compelling is the featured image’s hunger for high resolution pictures. Unless you feed it a fairly large-sized shot, it will lose resolution and appear slightly out of focus.
Some shots might have benefited by subtle HDR (high dynamic range) techniques, such as those of the old cars at the Seminole Restaurant. But Bulit doesn’t seem to be showcasing technique like some other documentary photographers. It’s all about subject with him. Also, I’d like to see an “About Me” section under the About menu. Readers want to know about photographers, their vision, their reasons for doing what they do, and a little about their method.

None of these observations detract from the voyage Bulit takes you on through America’s self-appointed weirdest state. It’s enough that he finds these outstanding out-of-the-way locations and tells us all about them.