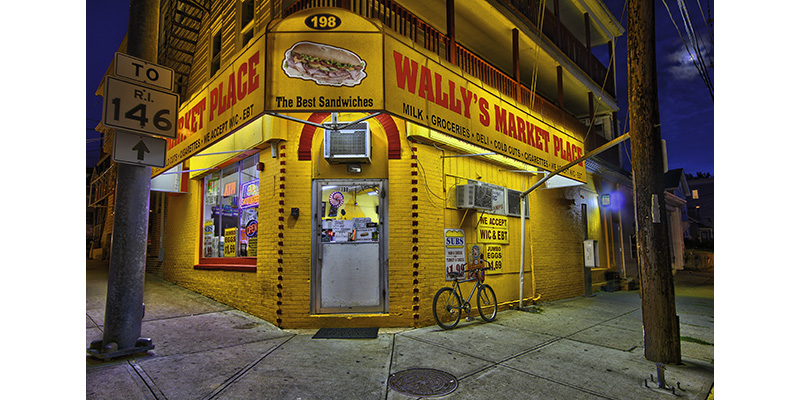 All I had to do was interview Mike Hotaling and he made me a free sandwich. A big one. Biggest one I’ve ever seen.

“It’s the ‘Bad Boy,’ he said. “what they call a ‘gutter sandwich.’ It’s got everything, cheese, ham, salami, beef, lettuce, tomato. Small’s close to three pounds, large is four and a half, and this Extra-Large Bad Boy, seven pounds. Could feed a family of five. And I invented it.”

Feeding people is what owner Mahmoud “Wally” Hassan has been doing for over a dozen years, as owner of the photogenic Wally’s Market Place in Woonsocket, RI. He’d worked his way from humble origins in Cairo, Egypt and made it to the United States. Here he drove trucks for a while, up to and including the period in which he was establishing his first store, the Broadway Market in Providence, RI. A few years later, opportunities arose to purchase Wally’s Market Place. There he became famous in his neighborhood for his inexpensive food and compassionate spirit.

“Wally does a lot for the community,” says Mike. At first I thought that meant he sponsored Little League teams or gave to the Woonsocket Police Relief Association. But Mike explained: “Homeless people come in once in a while and we help them out with food.”

And why not? It’s not that surprising that a cooperative spirit hovers over Wally’s Market Place. An ex-mill town like Lowell MA to the north, Woonsocket was filled with union activity and other expressions of community throughout most of the 20th century. Even the nearby Museum of Work and Culture celebrates that spirit in its displays and videos. It was the scene of many a labor struggle that spawned powerful fraternal organizations like the Amalgamated Clothing and Textile Workers Union. Whether they’re aware of it or not, Wally and Mike are probably continuing a historical tradition.

When fellow photographer Matt Temple and I finally left, we were lugging our Extra-Large Bad Boys. He consumed his over three days, but I, alas, am a vegetarian and had to give it away.