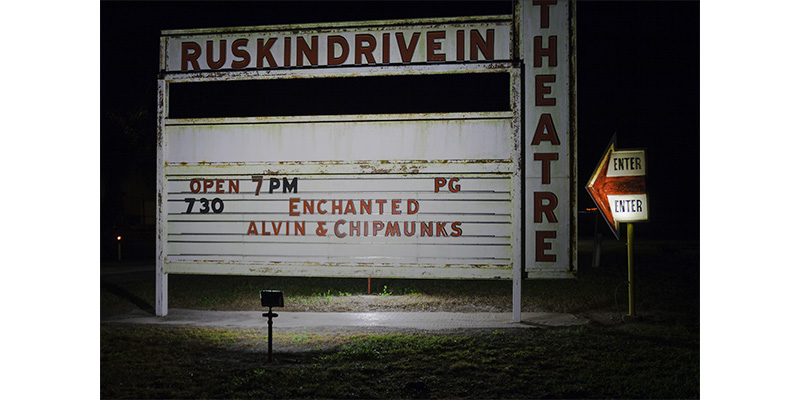 She knew what was photogenic and what was not. When I went to the refreshment stand to photograph anyone (and purchase popcorn), server Sheila Ramsay felt the small size (a large white styrofoam cup) “wouldn’t make a nice picture.” She suggested I purchase the medium size and she was right. It did look much better.

The Ruskin Family Drive-In Theatre opened the year Dwight Eisenhower became president. In 1952 alone it could have shown Singing in the Rain, The Quiet Man, High Noon, and – I’d like to think – the classic film noir Clash by Night. Nowadays, they still show double-headers, and for $6 a head, it’s roughly a quarter the cost of a mall cinema complex. When I first visited in 2007, it was showing Alvin and the Chipmunks and Enchanted. The drive-in prides itself on showing “family entertainment,” which means only G/GP fare. No classic “drive-in movies” here, redolent of horror and sex. No “passion pit” this.

But things haven’t always gone as smoothly as one of their movie plots. A few years back, the film industry did away with film stock, which necessitated the changeover to digital projectors at a cost of about $100,000. To do that, owners Ted and Karen Freiwald had to take out a mortgage. And last year, Publix Supermarkets decided to build across the street and tried to get the theater closed because it was a “public eyesore.” The Freiwalds won that battle too. For them, running the theater is not just a labor of love. It’s an entire raison d’etre.

Drive-ins are still closing up north – Massachusetts has only three left – and the ones that stay open have to do double duty as flea markets during the week. In the south it’s still possible for drive-ins to make it because of the year-long season. Nearby Tampa even has a triple screen.

But it’s still a struggle.