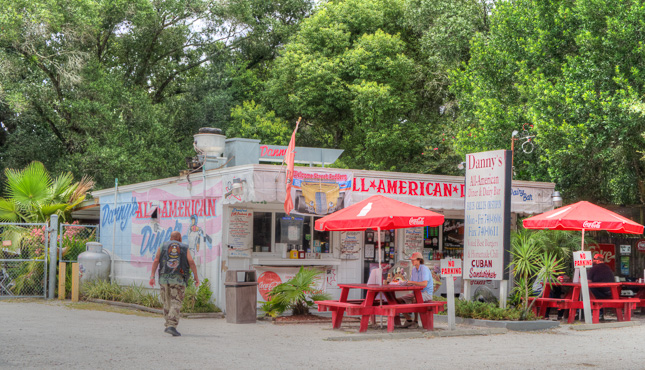 How can you benefit from HDR (high dynamic range) software? What is HDR, after all? Whenever pictures display blown out highlights or murky shadows, HDR processing is there to help. Properly applied, it opens up the dimmest shadows and tones down glaring highlights. The bugbears that have plagued us for centuries, those high contrast vistas and cityscapes, have been swept into to the same dustbin as Ektachrome film. HDR is particularly useful for photographs taken at dusk, during the “magic hour” just before sunset or the “blue hour” just after sunset (and before sunrise). It can also impart unusual, even surreal effects to a photograph.

To those who practice this arcane art, the software-to-go is Photomatix Pro 6.1.1. Let’s back up a bit. Most of the time, HDR requires that a photograph be a blend of three or more exposures, typically -2EV, 0EV and +2EV. Single-image HDR is possible, but it often doesn’t produce the same effects as a blend of images. Enter Photomatix. This product offers almost dizzying levels of control to your newly constructed HDR photograph. I call them sub processes. They are really called Detail Enhancer, Contrast Optimizer, Tone Balancer, and Tone Compression and they allow you to display and prepare HDR images (for later touchup and printing) that incorporate many types of adjustment. Within each are options like:

Yes, it’s a bit complex when you first encounter it. If you ignore the obsessions with legacy processes that photographers sometimes latch onto, like wet plate glass negatives, HDR is one of the more complex photographic post-process out there. There is a learning curve and it can get steep at times. Luckily there’s some support out there for it.

To begin with, HDRSoft.com, the makers of Photomatix Pro, has a helpful set of video tutorials (theirs and links to others) and an exhaustive FAQ. The FAQ even gets into such details as what to do about color noise, should it appear in your HDR image.

When I first began using this product, I admired the way it handled high contrast scenes. However, I didn’t always agree with the degree of adjustment that it supplied to some regions of the picture, such as highlights. This was even even after I’d tried some adjustment schemes. In some photographs for example, I would’ve liked to have seen streetlights rendered slightly darker to reveal texture. Now they have addressed this and included a feature, the Brush and Lasso tool. How does it work (or should I say “they work”)? In the past, when you blended three differently exposed photographs, you pretty much had to accept the degree of light or color that the blend gave you. Now if you use one of these little tools, you can select which of the multiple exposures you use to, say darken that streetlight. You can be as picky as you like. I believe you can even create some effects that aren’t in any of the three pictures you blend.

There is Help built-in to the Photomatix Pro Adjust & Preview dialog.  On the bottom-left there is a little question mark icon that, after clicking it, you’ll see the contextual help.  When you hover over a slider, there is bubble help text information.

Here are two images: The humdrum original photograph (not a bad shot, but kind of unexciting in the tone department) and the same photograph I altered via HDR processing. I did this process with one image rather than three. I actually darkened the fellow on the left somewhat within Photomatix, using its brush tool. (He had been disappearing into the wall.)

So even with that limited range of raw materials (a single image instead of the recommended three), I make the scene more vivid and restored some of the light gray that you see bleached out to white in the original.

Photomatix Pro is probably the best HDR process available. It is certainly the most richly featured. I highly recommend it.